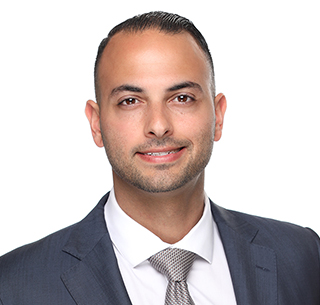 Joshua J. Youssefi is Lead Trial Attorney at Bickel Sannipoli APC. As a trial attorney at the firm, Joshua has proven himself a fierce advocate in both state and federal court, routinely obtaining highly favorable statutory repurchase settlements for his clients.

While the great majority of Joshua’s cases have been resolved without the need for a jury trial, Joshua has enjoyed a successful run of consecutive trial wins against a number of automotive manufacturers. Some of Josh’s recent trial verdicts and awards as lead trial attorney are as follows:

Given his love of the courtroom and outstanding trial record, Joshua was promoted to Lead Trial Attorney at Bickel Sannipoli APC in 2021.

As a Chicago native, Joshua enjoys exploring what San Diego has to offer without ever having to worry about a snowstorm. He enjoys boogie boarding with his daughter, jet skiing, grilling and watching sports with friends. Most of all, he loves traveling to new places and going on new adventures with his wife, Shannon, and daughter, Bri.

"I was having a reoccurring problem with my vehicle that the dealer couldn't seem to fix and when I contacted the manufacturer they were not willing to help me at all, so I contacted the Bickel law firm. This law firm knows what they are doing and will tell you honestly whether you have a case or not. I highly recommend that you give them a try."
Posted By: Rick Mills